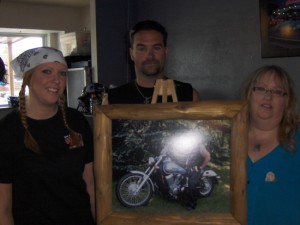 The event was in memory of Ole Barten, who lost his battle to cancer in February 2011. Hospice of the Red River Valley cared for Ole during his last months, and the family wanted to use the event as a way to give back to an organization that cares for so many families in the area.

The ride kicked off from Billy’s Corner Bar in Vergas. More than 90 motorcycles participated in the 125-mile ride. Nearly 200 people took part in the various events throughout the day, either as riders, volunteers or other participants.

Moments of special meaning took place throughout the day for Ole Barten’s friends and family. The route included a drive past his final resting place; riders revved their engines and honked their horns as they passed the cemetery. Kris Barten, Ole’s widow and one of the event organizers, recalls finding special meaning during one part of the ride. “Ole worked for the railroad for many years, so it was very meaningful when the entire group of riders was stopped behind a train at a railroad crossing during one point,” she said.

Next year’s event will be held August 25, 2012 in Vergas. According to Kris Barten, “We hope to make it bigger and better each year.”