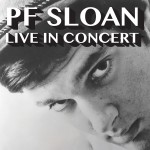 On Saturday, May 16, 2015, P.F. Sloan will perform at the Fargo Avalon Events Center West. Door proceeds from this concert will be donated to Hospice of the Red River Valley.

P.F. Sloan creator of the brilliant and controversial “Eve of Destruction” sung by Barry McGuire, was one of the “Pioneers of Folk Rock.” He wrote 150 songs recorded by major acts between 1965 and 1967, of which 45 made the charts.

Cost:
Tickets are $10 and may be purchased in advance at Avalon West ticket office, M-F 9 a.m.-3 p.m.; at High Plains Reader and also at the door. 21+ cash bar with theater-style seating.