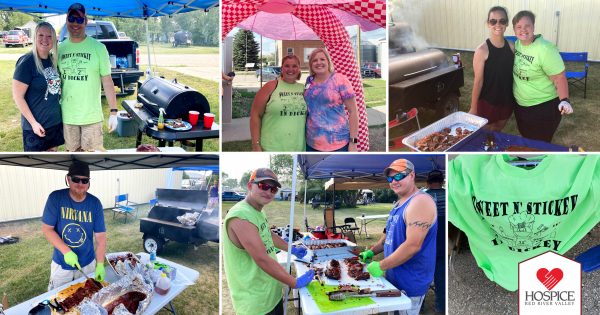 The annual Sweet N’ Stickey in Dickey Rib Cook-off was held on Saturday, July 11, in Dickey, N.D. In its 11th year, the event showcased 24 cooks, all hoping to win a Sweet N’ Stickey in Dickey trophy and generate donations for Hospice of the Red River Valley. Two hundred fifty people enjoyed 88 racks of ribs and numerous donated salads and desserts at the event. The event raised $10,500 for Hospice of the Red River Valley in memory of loved ones who have been cared for by the organization.

“We are thoroughly grateful for the amazing support shown for this event year after year. The friendly competition, continued donations, and returning smiles inspire us to host this event for Hospice of the Red River Valley every year. Thank you so much to all involved! We are thankful for what Hospice has done for us, and will do for our community in the future,” Chrissy Kartes, event organizer, said. Event committee members include Chrissy and Steven Kartes, and Dava and George Roder.