Funds raised through special events have played a pivotal role in keeping hospice care available and accessible throughout the Red River Valley for the past 30 years.

The Roger Maris Charity Golf Tournament is one of the longest-standing sources of financial support. In its 27 years, the tournament has given more than $1,500,000 to beneficiaries Hospice of the Red River Valley, Fargo Shanley High School (Roger’s alma mater) and the Roger Maris Cancer Center in Fargo, N.D.

Pat Maris, Roger’s widow, recently reflected on the tournament’s beginnings, and the family’s decision to support the work of Hospice of the Red River Valley through the annual event.

“Roger was back in Fargo for a function in 1983, and he was told that Shanley High School, our alma mater, was in financial need,” Pat explained. “Roger had played in many charity tournaments, and was aware it was a great way to bring people together for a great purpose, plus raise money. People had asked us to start golf tournaments in other places, but he always felt that Fargo was home and the people of Fargo deserved something like this.”

Just four years in, Hospice of the Red River Valley was added as one of the beneficiaries of the tournament proceeds. To date, more than $650,000 has been raised for the organization.

The union of Hospice of the Red River Valley and the Roger Maris Charity Golf was natural for the family. 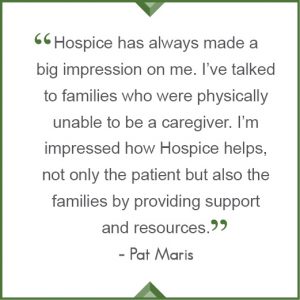 “When Roger was ill, I did not know that much about Hospice, and of course we weren’t able to experience it because Roger spent his last months at a medical facility,” Pat remembered. “After that, I heard so many wonderful things about hospice that when we wanted to expand our charities for the Tournament, I immediately thought of Hospice of the Red River Valley. I knew what an important impact the organization had on families in the Fargo area.”

The Maris family continues to stay involved in the annual event. Each year, the entire family—Pat, her six children, their spouses and the grandchildren—make the trip to Fargo from their homes in Florida for the tournament. With so many valuable causes, why has the Maris family continued to keep Hospice as a beneficiary for all these years?

“Hospice has always made a big impression on me,” Pat said. “ I’ve talked to families who were physically unable to be a caregiver. I’m impressed how Hospice helps, not only the patient but also the families by providing support and resources.  If the staff members I have met are a reflection of the rest of the staff, I can tell you they are really amazing people. I can’t thank them enough.”

Because of the generosity of the Maris family, tournament volunteers and participants, the linking of the Roger Maris Charity Golf tournament and Hospice of the Red River Valley has become a further expression of the dignity and love of a man whose heart was truly directed toward his family and home.