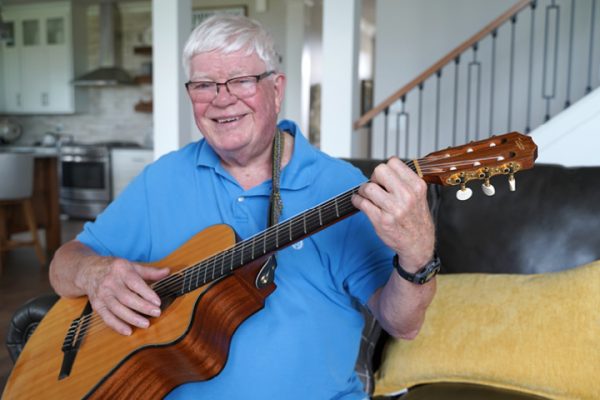 Music is a big part of Gene Okerlund’s life. He performed at his alma mater Concordia College, spent most of his career teaching music and in arts administration, and performs in big bands, master chorale, church choir, brass quintet and others.

But some of his most impactful experiences with music are through one-on-one visits with hospice patients as a volunteer with Hospice of the Red River Valley. “Music is one of the last things that leaves our soul,” Gene said.

Gene noticed the impact of music on his first visit as a hospice volunteer. He was paired with a patient in a facility who was prone to outbursts. Gene pulled up a chair and started playing music.

“She calmed right down,” Gene said. “I visited her for seven or eight months. She never spoke a word, but she would reach out and squeeze my arm. Every time I left, I would think ‘as a hospice volunteer you really receive a whole lot more than you give.’”

Gene has been volunteering with Hospice for more than eight years. He admits being nervous at first meeting people who are nearing the end of life. The worries quickly faded.

“There’s always a little bit of apprehension because you don’t know how they are going to respond,” Gene said. “But after my first experience, I realized there was nothing to fear.”

Gene has many examples where someone reacted to his music:

Another memorable moment was singing “Amazing Grace” at a memory care facility. Two young women came up to Gene with fresh tears on their faces following his set. They worked at the facility. The resident who sat between them had been nonverbal for three months as they cared for her physical needs. The resident had started singing along with Gene during that performance.

Gene plays many instruments, but his typical visit begins by taking out his guitar. Sometimes he’ll chat with the patient about the song and its meaning. “Every song has a story to it,” Gene explained.

His favorite song is “What a Wonderful World” by Louis Armstrong. He loves performing it, and he even has Armstrong’s signature vocal style down pat.

“The lyrics talk about so much of what we need in this world,” he said.

Gene tailors his music to each patient’s preferences. Some like church hymns. Others like Broadway musicals. Often, it’s songs they recalled from their childhood.

His repertoire thankfully included three Hank Williams songs for a patient who was a fan.

“She simply smiled when I was singing his tunes,” Gene shared.

Gene was a part of Hospice of the Red River Valley’s first We Honor Veterans recognition ceremony, where a patient who is a veteran is recognized for their military service and sacrifices. He led an audience of family and friends in singing “Battle Hymn of the Republic.” The hospice patient was a veteran of World War II.

“Here’s a fellow who spent an important part of his life serving us,” Gene said. “I loved that his family was there to support the occasion. I don’t think we can say ‘thank you’ enough.”

Gene is a four-time cancer survivor. He’s learned many life lessons from spending time with those nearing end-of-life. One of the most significant is the ability to let go.

Gene has advice for anyone who is apprehensive about playing music for a hospice patient: If music is something you love to do, then you have a gift to share.

“I don’t think hospice patients are concerned whether you have a great musical voice or that you miss a chord,” he said. “They just appreciate you being there. You make a new friend, and the more you are with people in these circumstances, you learn to understand the ‘signals’ and how much they are responding to the music.”

Gene continues volunteering, leaving each visit knowing it was a valuable moment for both. He said that even if a patient isn’t able to communicate, he knows from experience they are absorbing the music.

“I think of my parents and their message to us that as you get older and you have time to serve, you serve,” Gene said. “I’m fortunate to have music to use as a tool. That’s how I tell and share my story.”

Whatever your skills and interests, we have a volunteer role for you. Get started by contacting one of our volunteer coordinators at (800) 237-4629, send us a message, or fill out our online application.