As a medley of delicious aromas rolled through Dickey, N.D., early on Saturday, July 19, residents knew the Annual Sweet N’ Stickey in Dickey Cook Off was off to a successful start. In its fifth year, the event showcased 20 cooks from North Dakota and a few from Minnesota—all hoping to win a Sweet N’ Stickey in Dickey trophy and generate donations for Hospice of the Red River Valley. 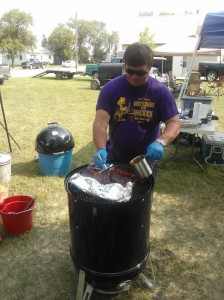 Participants set up their stations with rubs and utensils in hand by 11 a.m. Throughout the day, each entrant smoked, cooked and cured their ribs until later in the afternoon when they cut, seasoned and sauced the tasty meats for judging. Curt Seter, Hospice of the Red River Valley development officer, was invited to participate as one of the four guest judges during the event. “The experience was great,” he said. “The hospitality and friendliness of the organizers and participants made the day even that much more enjoyable.”

Judging took place in two categories: Judge’s Choice and People’s Choice, with both categories offering first, second and third place winners. While the judges meticulously tasted and tallied each participant’s ribs, community members lined up to have their own plate of the day’s fare. More than 40 racks of ribs were devoured in 30 minutes, as community members placed their votes for the People’s Choice awards. “The event was very efficiently run, and the ribs were delicious,” Seter said. “It was so great to see the turn out and the community rally behind such a worthy organization that helps so many.” 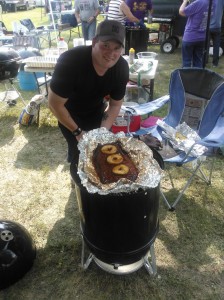 By the end of the night, most of the food was gone, but the donation bucket for Hospice of the Red River Valley was full. As donations still come in, the total raised so far is $2,300. “This is the most we’ve been able to donate to Hospice of the Red River Valley in the five years we’ve been holding the event,” Chrissy Kartes, event organizer, explained. “We’re thrilled, and this would not have been possible without great donations from the people in and around our community.”

“A big thanks goes out to numerous people who brought side dishes, Walmart in Jamestown for donating $50 for ribs and Dale and Alicia Pekarski (owners of Dickey Bar) for opening their doors to host this event,” Kartes shared. “We are so appreciative to the many families and friends who donated to a great organization.”