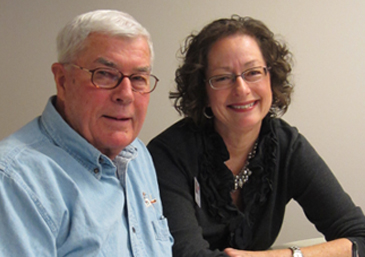 “With a charitable gift annuity, you’re getting something back, even though you’re helping.”

It was over a year ago, during a casual conversation with development officer Joy Crouch, that volunteer Hal O’Connor first considered a planned gift to Hospice.

“Joy always shares ideas with me,” says Hal with a laugh. “She asked me one day if I’d ever considered a charitable gift annuity. I took some information, but I wasn’t ready to be serious about it.”

A native of southern California, Hal has been a resident of the Midwest for more than 40 years. He has grown to love this community and gives back, with both time and financial resources, to Hospice of the Red River Valley and several other organizations.

When Hal started as a Hospice volunteer in April of 1994, he provided patient visits and respite care for caregivers.

“Now, I go to the Hospice office every day—I need this organization more than it needs me,” Hal says. In recent years, he has found his real passion is helping in the office. Nearly every day, he is in the Detroit Lakes office sorting mail, updating materials, delivering medications and supplies to patients, and so much more.

“There are days when I wonder what he doesn’t do,” says volunteer coordinator Stephanie Baker. “He doesn’t let anyone in this office down. Hal is part of our team, but more than that, part of our lives.”

Despite the tremendous gift of time Hal contributes to Hospice, he has also been a faithful financial donor to the organization. After his retirement from a large insurance agency, Hal took advantage of a unique program offered to retirees. “If you volunteer for at least 40 hours a year, they donate $500 to a charity of your choice. In this way, I’ve given a gift to Hospice every year,” says Hal.

Still, Hal was open to new ways to support Hospice.

Deciding he was ready for more information about the advantages of this planned giving option, he went to Joy for answers. “She provided a lot of information, and laid it out in a way that made it easy to understand,” Hal shares. “The calculations were easy, and I liked that the models showed you the exact benefits you’d receive from the charitable gift annuity. It’s very simple—I just had to write a check.”

The timing was especially good for Hal. “I happened to have 30-year-old savings bonds coming due every month. Whether you cash the bonds or not, you have to claim interest when they come due.” Rather than let his funds sit stagnant, Hal decided to put them to work.

“I learned if I made a donation with a charitable gift annuity, I could get a tax benefit and income from my gift for the rest of my life. It just made sense to me for the tax advantages, as well as to support Hospice,” Hal says.

Charitable gift annuities are a popular investment choice for their relative simplicity:

• The donor transfers cash or another asset to a nonprofit organization now. (The minimum donation is $5,000.)

• In addition to other tax advantages, if the donor pays taxes in North Dakota, a significant North Dakota tax credit applies.

• The donor receives a fixed income stream for life from the nonprofit organization.

• Upon the donor’s death, the principal passes to the nonprofit organization.

Charitable gift annuities are appealing to many for their immediate benefits. Donors have a chance to make an impact on their community by donating to a charity, while receiving immediate tax advantages. In addition, donors receive a guaranteed income stream for life, and the return is generally much higher than interest rates on CDs or bonds. Therefore, the actual cost of a gift is significantly less, dependent on each individual’s tax situation.

Hal, who is 78, decided to give a $5,000 charitable gift annuity, which earns him 7 percent for the rest of his life.

“I don’t see any disadvantage in doing a charitable gift annuity,” Hal says, “I have other annuities—but most are only paying 3 or 4 percent. Even if it was taxable, the interest rate is good.”

Hal says the benefits of a charitable gift annuity prompted him to make a larger gift than he may have otherwise chosen, and feels they may do the same for others. “I think it’s a good deal, because much of it is tax-free for at least the first several years. That’s really appealing.”

According to Hal, choosing to support Hospice with a charitable gift annuity was a “win-win” situation. “You’re getting something back, even though you’re helping,” Hal points out. “Even if I passed away before I was able to get many of the interest payments, that’s OK, because the main thing is for Hospice to get the money they need to continue their good work into the future.”