Skip to content
Home > Stories > Donor Stories > Committing to a Cause 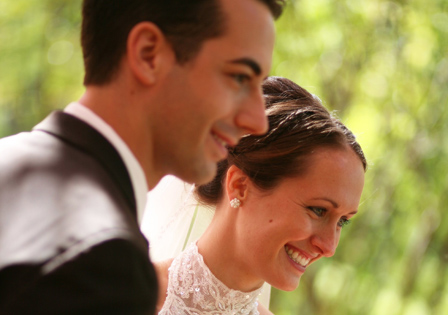 Dave and Emily (Atchison) Gess were married in October of 2008. That alone is not unusual; what is unusual is the fact that they wanted to include supporting a non-profit organization as part of the wedding. Before they were married, both Dave and Emily had a grandfather who was served by Hospice of the Red River Valley. Emily thoughtfully stated, “I couldn’t imagine my grandpa not being at my wedding!”

It was tough to accept that neither of these men would be there as the plans for the wedding were coming together. Rather than simply grieve their loss, they decided to commemorate their beloved grandfathers at their wedding in a unique way. They chose to make a donation to Hospice of the Red River Valley instead of putting party favors on the table for their guests. In place of the traditional party favor was a small table tent indicating their intentions. The emotional value Dave placed on their donation was evident when he said, “It meant so much more to us than a little charm. We wanted to give back to an organization that has touched our lives.”

Giving is something that the Gess’ want to make as a regular part of their lives. Not only did they decide to support Hospice of the Red River Valley the day of their wedding, they have decided to begin a tradition by making an annual donation on their anniversary in memory of their grandfathers. “This is one way we can develop good habits,” comments Dave. That’s when Emily proudly stated, “Some day when we have children, we want them to realize that giving to charity is a normal part of our lives.”

They both talked about the fact that the dollar amount is not what matters; that it really comes down to taking action and choosing to support something a person believes in. Emily reasoned that “If everyone gives a little, it goes a long way. Right now this is what we can do. As our income hopefully goes up,” she says with a laugh, “Our giving can go up as well.” Emily’s last comment was one that maybe says it best, “If we can encourage just one person to give by our example, then our gift goes that much further.”