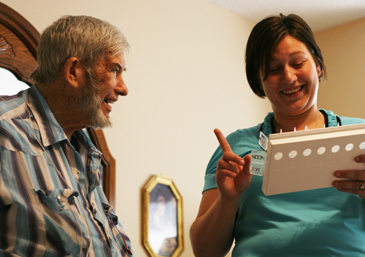 Don may no longer be king of the road, but with Hospice of the Red River Valley and Home Sweet Home, he feels like he is “king for the day, everyday.”

After driving truck nearly two million miles over the course of 17 years, Don Brantner was king of the open road. He loved what he did, and took pleasure in meeting – and lending a hand to – the new friends he met along the way. So much so that after his daughters were married and had families of their own, Don would often volunteer to drive on the holidays, making it possible for other drivers to be home with their families. Some of his most treasured memories happened during these holidays on the road.

Don was “shooting the bull with some guys” at a truck stop in Black River Falls, Wisconsin, when he heard someone gasping. He looked over to find the man at the next table choking. Don had first-aid training and knew exactly what to do. “First, I said a little prayer; dear God, give me all the strength you can give me,” Don says. “Then, I got up and went behind the man…I should have stood him up, but there just wasn’t time. Instead, I kneeled behind him and started doing the Heimlich maneuver.”

As he shares his story, Don’s hands form a fist to illustrate his actions that day, “It took three good, hard pulls…I used all my strength, but I saved him.” Don gets emotional as he recalls the impact he made that day. He takes a moment to compose himself and then continues. “I never did get his name…I wish I would have gotten his name.”

At another truck stop, this time in Gary, Indiana, a young man approached Don and asked if he had a couple of bucks for coffee and sandwich. Don took one look at the man and could tell it had been too long since he had a good meal so he dug out some cash and answered him, “Nope, but I do have 20 bucks for a big breakfast.”

The young man was so grateful that he broke down in tears. Twenty minutes later, Don saw that same young man sitting at the truck stop café with a plate heaping full of food.

Driving through Montana, another young man was looking for help. This time, the plea comes across Don’s CB radio. The man, or “kid” as Don calls him, was in Montana and looking for a ride to Olympia, Washington, where his mother was having surgery the next morning. Don radioed back “Hey bud, I got a ride to North Bend, Washington for you. That will get ya’ close.” The kid gladly accepted, so Don made a short detour to pick him up at a nearby gas station. Don appreciated the company and, as always, was happy to help.

As they neared North Bend, Don told him, “Time to get on the mike kid, let’s keep this thing going.” Shortly after putting out the radio request, he received a response back from a trucker that was headed right past the hospital in Olympia. Thanks to Don and several other generous souls along the way, the kid made it in time for his mother’s surgery.

Years later, the tables have turned and Don is now the one in need of help. He has colon cancer, diabetes and heart disease. For a man that is used to setting his own course, it has been difficult to accept direction from others. His doctor and his family suggested hospice care. However, Don – like so many others – believed hospice was “where you go to die.” In fact, he only made the call after his daughter Laura, who lives in Seattle, insisted, telling him she was going to get on the next airplane to Fargo if he didn’t get signed up for hospice care. Although he still wasn’t convinced, he didn’t want Laura to spend her money on last-minute airfare.

When his Hospice nurse, Katie, came for her first visit she found him leaning against his kitchen counter, visibly in pain, in a home that had been neglected as he battled his health issues. Don describes this time as “tough going” and Katie agrees. “It wasn’t easy at first,” she recalls. “We (the patient care team) had to work hard to gain his trust.”

While Katie worked on managing his pain, the nursing assistants came by to help Don with his daily cares and the neglected housework. In an effort to get Don’s pain under control, he was checked into the hospital for a short time. While he was there, Katie and Cathy, his Hospice social worker, used the time to find a place where Don could be more comfortable. They found the perfect fit in Home Sweet Home, a personal home that is open to those in need of a little extra care in a beautiful setting just a few miles from town. They took pictures of the facility, and brought the photos to the hospital in an effort to plant the seed. After learning that there would be space for his car, Don agreed to give it a try.

Despite his initial reservations about hospice care and moving, Don’s pain is now under control and he is thriving in his new home at Home Sweet Home. In July he hosted his entire family, including his Hospice team, for a picnic in his big backyard. This simple pleasure was significant, given that he has never had a place big enough for a picnic before. Don chuckles as he describes the fun he had watching his eight grandsons running around the big yard. “After raising three girls, I am not used to seeing all those boys around.”

Three months after making the move, Don wakes in the comfort of his home surrounded by new friends, and the reassurance that his Hospice family is just a phone call away. Don is amazed by the change a few short months has made in his life, “It’s a totally different atmosphere. There is peace and serenity here,” he says. Don may no longer be king of the road, but with Hospice of the Red River Valley and Home Sweet Home, he feels like he is “king for the day, everyday.”