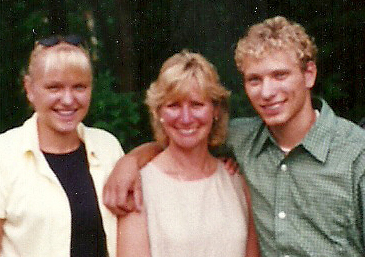 Several months following her death, Sheri is deeply missed, but neither of her children, Zach and Rachael, feels a moment of remorse or regret about how she passed away.

Zach greets his sister Rachael with a big hug. They have just arrived at Oak Crossing, the nursing home in Detroit Lakes where their 53-year-old mother, Sheri, worked and eventually lived during the last few months of her life.

It’s been six months since their mother passed away from brain cancer, and these young adults have taken a break from their jobs, their families and dealing with their mother’s affairs to share her end-of-life story.

The story of Sheri’s illness began over 20 years ago. Zach was a second grader and Rachael was only 5. Sheri was experiencing terrible headaches and discovered the cause was an inoperable brain tumor. She began her fight against cancer immediately.

Zach describes her treatments as “prayer and radiation therapy”. Sheri prayed that she would be allowed to live and raise her children, asking God to just let her get them through high school.

Sheri survived the cancer and a divorce from her high-school sweetheart. As a cancer-free, single mother, she carved a new path for her life and got a job at Oak Crossing, first as a certified nursing assistant to get her through nursing school, and then as a nurse after completing her degree.

Most importantly, she treasured this time with her family, offering forgiveness, kindness and love to everyone who touched her life. She would smile at complete strangers just to brighten their day. Her children remained the light of her life. Zach remembers how a look of sheer happiness would cross her face when either he or Rachael would walk in the room.

Twenty years after her first battle, the headaches returned. This time, the news from Mayo was promising. The tumor was operable, and surgery was scheduled in Fargo. Sheri insisted it be in Fargo, closer to her family so they wouldn’t have to travel to visit her.

During the surgery, the doctors discovered the cancer was deep within the brain tissue. Although the tumor was removed, her cancer remained.

Sheri bravely battled cancer again, but as Zach and Rachael say, “she knew.” Her illness caused peripheral vision loss and lapses in short-term memory, which her 3-year-old grandson would brush off as “Grandma being silly.”

Through it all, Zach and Rachael did everything they could to support her. Rachael and her fiancé moved in with Sheri to help. Even though her health was failing and she had to quit her job, Sheri kept her spirits up, often joking and lifting others’ spirits up as well.

Rachael smiles when she tells about her mom saying that she messed up when she made her deal with God. She should have asked to stick around to watch her grandchildren grow up, not just her children.

Eventually Sheri went back to Oak Crossing—but not as a nurse. This time, she was a patient. She was given the “Circle of Life” room, a larger room that would allow for all of her visitors to be comfortable. It was here, with the loving support of her family, her Oak Crossing colleagues and her Hospice team that she spent the remainder of her days.

Her family spent this time visiting, sharing memories and simply enjoying her company. Her Oak Crossing colleagues spoiled her and provided her with the daily cares she needed, while her Hospice team ensured she was comfortable until the end.

Zach and Rachael describe the care she received from both Oak Crossing and Hospice as a gift. To know their mom had such special and loving care eased their burden. Sheri is deeply missed today, several months following her death, but neither Zach nor Rachael feels a moment of remorse or regret about how she passed away. Rather than feel sorry for themselves, they both simply appreciate the time they had with her.

As they leave the nursing home, Zach and Rachael embrace, their love and respect for each other is visible in their words and actions as they part. Zach asks Rachael, “Do you want to go clean out Mom’s kitchen tonight?” Rachael responds, “Do you?” Zach replies, “No.” They smile at each other, decide to do it later in the week, and then head off to spend time with their families.

They aren’t bitter about the extra burden they have been given; they are simply responsible, beautiful people following in their mother’s footsteps. What a rich and lasting legacy for a mom to leave her children.